Well, it’s finally October. Which means it’s supposedly Fall. I say “supposedly” because the high temperature here today was 91º! Even though the weather isn’t playing along, I am definitely planning my Fall knitting. Hopefully the weather will catch up to me soon!

As I’ve mentioned about a million times on this blog, Fall is my absolute favorite season. Even though I do knit year-round, I always want to knit all the things when Fall arrives. It’s definitely the start of knitting season!

Last fall, I started knitting a sweater – the Hiro pullover – and, well, by the time warm weather arrived again, I was not finished and could not bear to knit on a wool sweater while it was hot outside. So now that we are starting to cool off again (at night, at least) I am ready to pick this sweater back up and finish it! 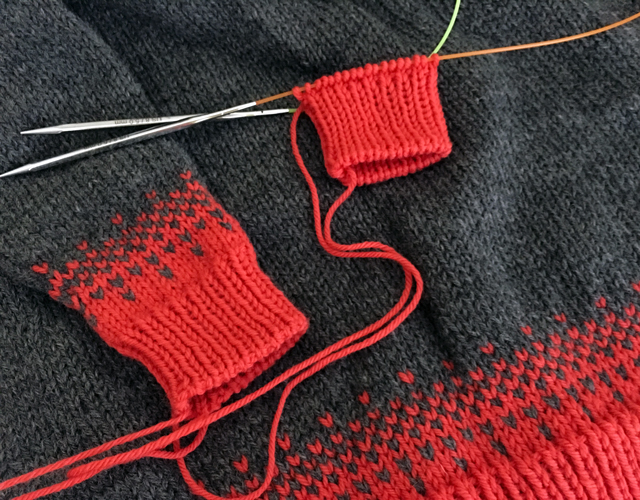 Look! I’ve cast on the second sleeve! Once I finish this sleeve, I can join it to the body of the sweater along with the other sleeve, and then I’ll start the yoke! The end is in sight! Of course, right now I can only work on it in the mornings when the house is at its coolest!

Another project I’m working on is a new shawl design and it is really making me long for cooler temperatures. 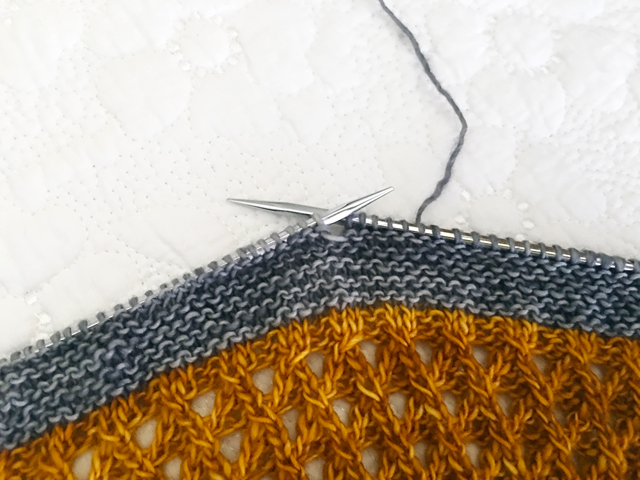 I’m knitting it in Madelinetosh’s Tosh Merino Light (one of my faves!) and I am really happy with how it’s coming out. I can’t wait to drape this around my neck!

Now can we just talk about the needles for a moment?! I’m using the Knitter’s Pride Cubics for both the Hiro pullover and this shawl and I am head-over-heels in love with them. Anyone who knows me, knows that I am a diehard Knitter’s Pride Karbonz fan. My Karbonz interchangeable set goes everywhere with me. They are the only needles I use! Well, that is, until now!

What makes Cubics different? The needles are actually square instead of round, which helps you grip them more ergonomically and that helps you knit for longer periods of time without strain on your hands. 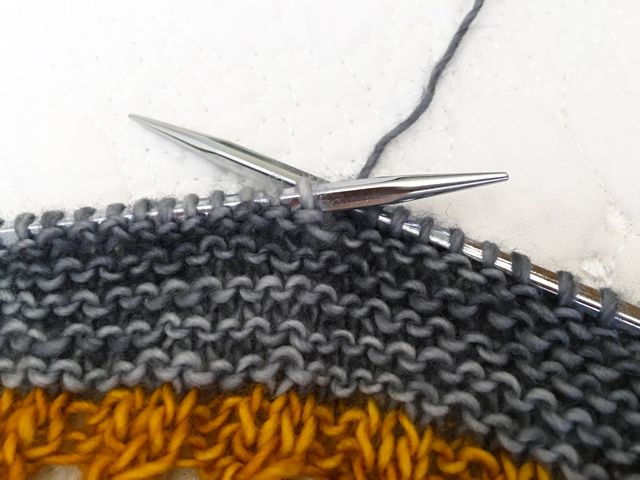 I have been known to knit for 8-12 hours at a time when deadlines are looming (or for last-minute gift knitting! Guilty!). This can lead to some painful hands! And just last Christmas I was out of commission for a couple of weeks due to tendonitis in my left hand. It was terrible!

So I was curious about these Cubics needles and wondered if they were something I needed. Then a set of the Cubics interchangeable needles fell into my lap at just the perfect time. These are the first needles to ever compete with my Karbonz! Of course, they are both made by the same company so I guess if any needles were going to challenge my obsession with my Karbonz, it would be another needle from Knitter’s Pride!

Knitter’s Pride has made a few changes since I bought my Karbonz set almost three years ago. My favorite change is the new color-coded cords! Now I know which cord is the longest with just a glance! Also, these Cubics came with a set of three cord connectors so I can create practically any length! Since my longest cord is currently being used for the shawl, I connected two shorter ones so that I could magic loop that second Hiro sleeve. Perfect! And they are super pointy. Pointy needles are a must for me! Also, I can use all of these cords and connectors with my Karbonz needles as well!

So I won’t be abandoning my Karbonz completely! But I will say that with three new designs currently in progress, my Hiro pullover almost finished, the 2016 Desert Vista Dyeworks sock club coming to a close, and a huge holiday project I’m working on with my knitting group, there will be a LOT of knitting marathons in my near future. And I, for one, am so grateful to have these Cubics needles in my knitting arsenal! My hands are going to thank me!